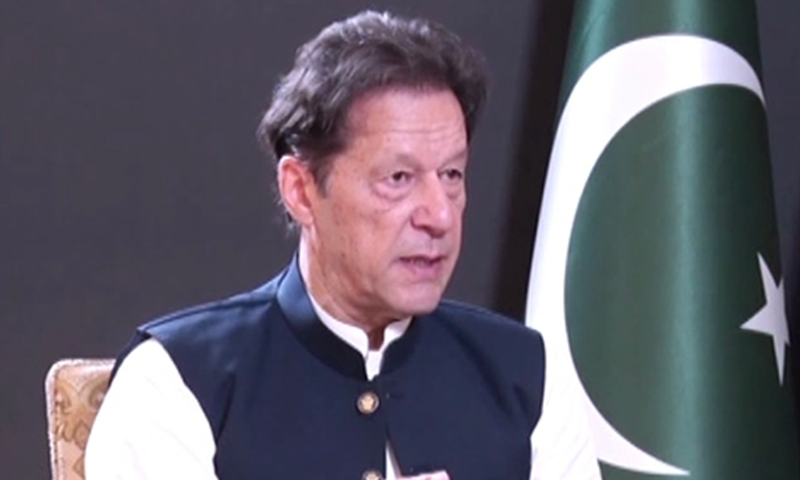 Prime Minister Imran Khan has said “sooner or later” the United States will have to recognise the Taliban government in Afghanistan.

In an interview with TRT World, the premier said hearings of the US Senate Foreign Relations Committee clearly implied that Americans were “completely surprised” by the Taliban coming back to power.

“They [US] are trying to find scapegoats and one of them is Pakistan,” PM Imran said, emphasising that this was not a rational mindset for a way forward.

He insisted that if the US kept Afghan reserves frozen and the Afghanistan government collapsed in its wake, “the biggest loser will be the people of the country.”

Imran said he found that President Biden was being “unfairly targeted” over the withdrawal of troops from Afghanistan. He questioned how it could be anyone’s fault when the Afghan army itself collapsed.

The prime minister said the Taliban movement grew over a period of time in the face of US drone attacks and collateral damage from such attacks. “The American public had no idea what was going on in Afghanistan. Gen Kayani in 2010 told President Obama that there was no military solution in Afghanistan,” said PM Imran.

‘Govt in talks with TTP groups’

The premier also said the government was in talks with some groups of the banned Tehreek-i-Taliban Pakistan (TTP), seeking a reconciliation.

“There are different groups which form the TTP and some of them want to talk to our government for peace. So, we are in talks with them. It’s a reconciliation process,” he added.

When asked if the government was asking them to lay down arms, the PM responded: “Yes, we forgive them and they become normal citizens.”

The interviewer then asked why the TTP was conducting attacks on Pakistan’s security forces when they were in talks with the government. To this, the premier said it was just a “spate of attacks”.

“We might not reach some sort of conclusion or settlement in the end but we are talking, and we are also talking to Baloch militants for political reconciliation,” he added.

PM Imran said Pakistan’s security forces launched a big operation in North Waziristan in 2014 and “the TTP doing terrorist attacks was pushed out and they then went into Afghanistan.”

He said the TTP was subsequently helped by Afghan and Indian intelligence agencies.

The interviewer then referred to elements holding contrary views to those of PM Imran, who was termed by some as ‘Taliban Khan’.

Imran responded: “You see there was an awful, arrogant, imperialistic attitude of the Americans under George Bush because of his statement ‘either you are with us or against us’”.

He said since he opposed the US policies he was dubbed “pro-Taliban”.

When asked if he was actually “pro-Taliban”, Imran insisted he was “anti-military solutions”.

He said he had always been against military solutions.

“I even objected to my own country using military means for instance in East Pakistan, when we used military to resolve the issue,” he said.

‘Pakistan not responsible for what happened in Afghanistan’

The prime minister rebuffed US claims of Pakistan being responsible for the Afghan fallout.

“Whenever this anger goes and some rationality appears in the US, they will realise how could Pakistan be responsible for this,” said the premier.

If you analyse, he said, the conclusion will be anything except [blame for] Pakistan.

He said Afghans had always resisted foreign occupation, as “their culture is democratic, they don’t accept foreign occupation. The collateral damage was there was hatred against the Americans and that hatred translated into more militancy and Taliban became a popular movement in the rural areas.”

The prime minister dispelled the impression that his government was trying to interfere in Afghanistan’s internal affairs by clamouring for the formation of an inclusive government.

He said the point of interference could be debated if the Afghan government was given dictation on handpicking certain elements in the government which, according to him, was not the case.

He said the Taliban were in a difficult position, adding that he had no idea “what will happen” in the current situation.

While talking about the human rights situation in Afghanistan, PM Imran said those talking about human rights abuses by the Taliban should also raise their voice against Indian atrocities in occupied Kashmir. “Otherwise they will lose their credibility.”

When questioned about growing inflation and the opposition’s criticism of his government, the prime minister said Covid-19 had disrupted supplies across the world including Pakistan.

“But this is temporary. Things will settle down once the supplies are resumed,” said the PM.