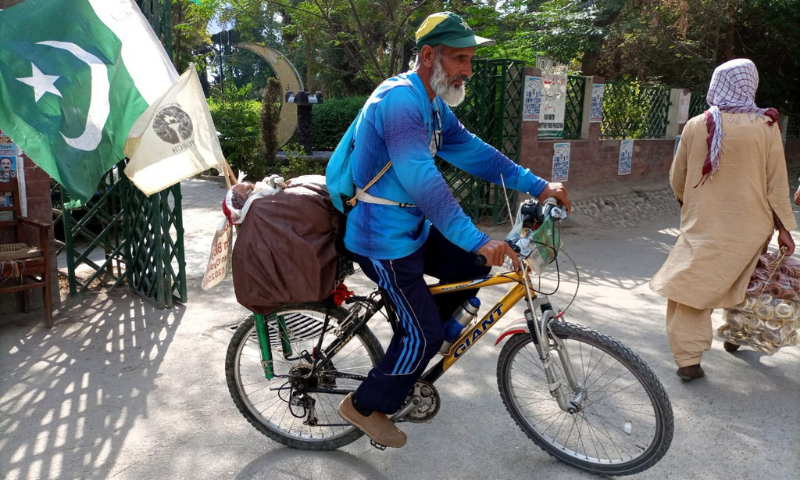 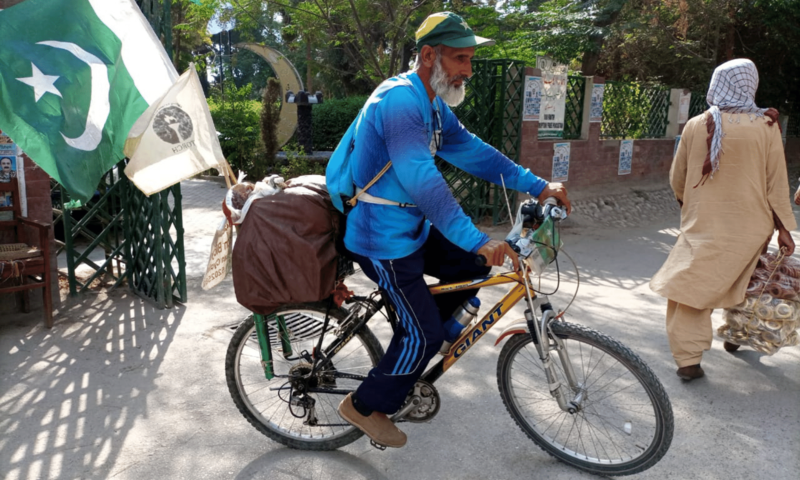 In his latest trip, Haji Farosh Khan cycled from Swabi to Quetta in 11 days.

On Pakistan’s busy roads, which at most times are dusty and swarmed with smoke-emitting vehicles, 61-year-old Haji Farosh Khan, a resident of Khyber Pakhtunkhwa’s Swabi district, often goes unnoticed. Even the national flag tied to the seat of his cycle fails to draw much attention. Yet, he continues to cycle his way from one city to another, spending long, hot afternoons of summer, and chilly winter evenings on roads with one aim — to spread the message of peace and promote a positive image of his homeland.

His wrinkles and white beard may deceive one into doubting his ability to achieve his objective, but old age is no bar to his ambitions.

According to Khan, he began touring different cities on his cycle in 2015.

“Terrorism was at its peak then and to present the soft image of Pakistan, I began my struggle on a cycle, which continues to this day,” he said.

In his latest venture, he travelled all the way from Swabi to Quetta in Balochistan over a course of 11 days, covering a distance of around 938 kilometres.

“This is the second time I have arrived in Quetta with the aim to spread the message of [peace and] brotherhood,” Khan said. He added that his journey to Quetta took him through Kohat and Dera Ismail Khan in KP and Zhob and Qila Saifullah in Balochistan.

The journey was long and there were difficulties on the way, he admitted, but added that none of that mattered as he had a strong will and was determined to reach Quetta.

Khan, who used to work in the telecom sector and is now retired, said he had always enjoyed cycling but “it has now [become a part of] his mission”.

He said he had been travelling through different cities since 2015, yet his struggle remained unacknowledged by the government.

“But the children here appreciate me and that’s enough for me,” Khan said. “I am what I am today because of Pakistan.”

Khan has his mind set on just two objectives: continue with his “mission” to spread the message of peace and present a soft image of Pakistan to the rest of the world, and travel to Makkah and Madina on his cycle if he gets the needed assistance from the government.