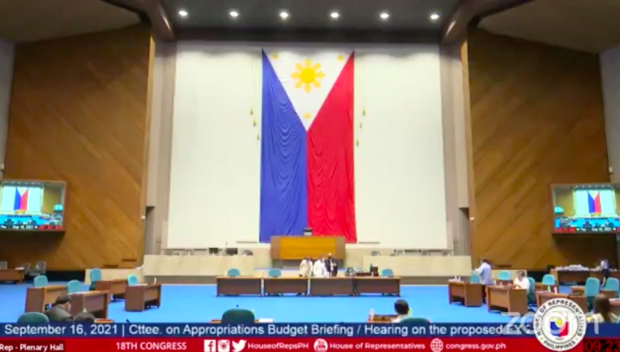 As they did last year, the House of Representatives passed late Thursday the largest appropriations law in Philippine history, by a vote of 238-6-0, with nary a change from the P5.024-trillion budget proposed by Malacañang and raising a howl from the opposition at how President Duterte’s last spending plan was railroaded.

“The swift and smooth passage of the proposed 2022 national budget shows our collective commitment and resolve to help our kababayan and economy build back better and hasten economic recovery through the effective delivery of government services,” Speaker Lord Allan Velasco said after the vote.

“When all is said and done, we hope that our people can look back at this period and see that we have done our duties despite the present crisis,” he added.

But the minority Makabayan bloc disagreed with the Speaker and said the bill did not allot special risk allowances of health-care workers, social amelioration for indigents, aid for transport workers and even funds for COVID-19 shots.

“The passage of the 2022 budget was once again railroaded,” said House assistant minority leader and ACT Teachers Rep. France Castro.

Castro noted that Malacañang submitted the 2022 National Expenditure Plan to the House on Aug. 23 and the appropriations panel began committee hearings that same day while the House plenary only discussed the bill from Sept. 21 to Sept. 30.

Critics said the budget, or House Bill No. 10153, did not provide for the people’s needs and made them dependent on presidential largesse in the year that Duterte said he would run for vice president while his daughter was expected to run for president.

But Velasco disputed the opposition’s claim.

“We pushed for the budget, but always with respect to the concerns of the minority,” he said, although none of the changes the opposition wanted were embodied in the approved bill.

Velasco, however, insisted that HB 10153, already approved on third and final reading, would still be amended by a group of five members of the House as they also did last year.

“The amendments will be consolidated by next week, then 12 days for printing and five days for encoding. We hope to transmit it to the Senate by Oct. 27,” Yap said in a text message.

Last year, senators criticized the House for the practice of inserting amendments to an already-approved bill, saying it was only a way to insert pork barrel funds away from the watchful eyes of critics.

The President himself did not veto the insertions, but withheld the release of about P160 billion by classifying them as funds “for later release” and making members of the House dependent on Malacañang for the funds’ release.