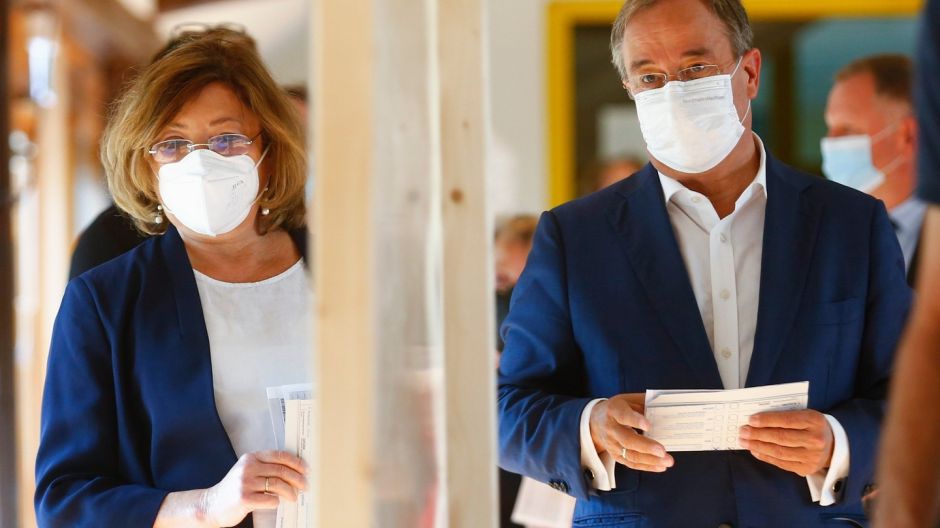 German politicians have urged more than 60 million voters to come the polls on Sunday and elect a new government in what forecasters say will be the closest race in years.

Chancellor Angela Merkel is standing down after four terms rather than seeking re-election, throwing open the succession race.

The two parties have shared power for all but four of the last 16 years but are now seeking alternative coalition options to retain power.

“It’s a exciting day…when the voters speak, not the politicians,” said Armin Laschet, CDU leader, after voting in his western home town of Aachen. He urged people to come to the polls, saying it “will come down to every vote”.

As for his own vote, Mr Laschet folded his ballot paper incorrectly and photographers spotted his two votes for the CDU as it vanished into the box.

Down south in Munich, Mr Laschet’s Bavarian ally Markus Söder, head of the Christian Social Union (CSU) tweeted a vote of himself voting – with the ballot paper folded correctly – as he urged others to do likewise.

“Today’s decision day,” he said. “It will be a neck-and-neck finale, it’s down to every single vote.”

SPD leader Olaf Scholz, front-runner for most of the campaign, said the good weather across Germany was a “good sign” for a high turnout. He is hoping to capitalise on a mood for change – but not too much – among voters facing into the post-Merkel era.

“I hope as many citizens as possible will go to the polls and make possible what’s become clear: that there will be a strong result for the Social Democrats,” said Mr Scholz after voting in Potsdam, west of Berlin.

He is seeking a mandate to become Germany’s next chancellor after forming a coalition that excludes the CDU.

Sunday is also state election day in the north eastern state of Meckelnburg-Vorpommern, since 1990 Mrs Merkel’s political homeland, and the city-state of Berlin.

The German capital is also holding local council elections – and asking voters whether the state government should force corporate landlords to sell them their housing stock.

Polls opened at 8am and will close at 6pm (5pm Irish time) with immediate exit polls.

Projections based on actual results will follow during the evening and, based on previous experience, results begin to firm up after 9pm Irish time.

A large number of postal votes – only counted later – may have a disproportionate affect on the preliminary result on Sunday evening or early Monday morning.