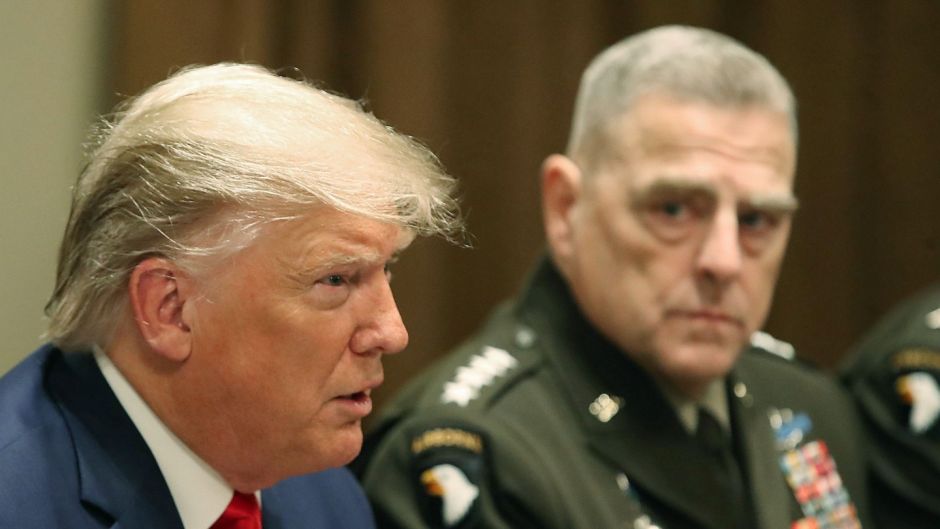 The chairman of the United States’ joint chiefs of staff twice called his Chinese counterpart in the final months of the Trump administration to reassure him that Donald Trump had no plans to attack China in an effort to remain in power and that the US was not collapsing, according to Peril, a new book by the Washington Post reporters Bob Woodward and Robert Costa.

“Things may look unsteady,” the chairman, Gen Mark Milley, told Gen Li Zuocheng of China on January 8th, two days after Trump’s supporters stormed the United States Capitol to try to stop the certification of his election loss, and in the second of two such calls, according to the book. “But that’s the nature of democracy, General Li. We are 100 per cent steady. Everything’s fine. But democracy can be sloppy sometimes.”

Yet despite his assurances Milley was so concerned about Trump that later that day he convened a meeting with top commanders to remind them that the procedures for launching a nuclear weapon called for his involvement in such a decision.

The book details how Trump’s presidency essentially collapsed in his final months in office, particularly after his election loss and the start of his campaign to deny the results

The book also reveals how Vice President Mike Pence struggled more than was publicly known about how to navigate Trump’s demands that he upend the election certification. Speaking privately to former Vice President Dan Quayle, who oversaw the certification of the 1992 election in which he was on the losing ticket, Pence appeared open to going along with Trump’s plan, pushed the false claim that Arizona’s voting results were wrong, and asked whether there was any way he could delay certification.

Peril, which is due to be published on Tuesday, September 21st, says its accounts are based on contemporaneous notes, documents and interviews with unnamed firsthand participants and witnesses. The New York Times obtained a copy of it. Similar to other media reports and books released since Trump left office, the book details how Trump’s presidency essentially collapsed in his final months in office, particularly after his election loss and the start of his campaign to deny the results.

Top aides – including Milley, defence secretary Mark Esper and attorney general William Barr – became convinced that they needed to take drastic measures to stop him from trampling on American democracy or setting off an international conflict, and Milley thought that Trump had declined mentally in the aftermath of the election, according to the book.

A little less than half of the book also covers the first several months of Joe Biden’s administration, as the new president grappled with the pandemic, a faltering economy, the United States Congress and the military’s withdrawal from Afghanistan. “If the mission is to preserve the Ghani government, I would not send my own son,” Biden is quoted as telling aides in his first few months in office during the discussions about the withdrawal, referring to President Ashraf Ghani, who at the time was trying to repel the Taliban from taking over the country.

In the days leading up to the 2020 election, US intelligence showed the Chinese believed Trump planned to launch a military strike to create an international crisis that he could claim to solve as a last-ditch effort to beat Biden

But it is the book’s details about the Trump administration that are likely to garner the most attention. In the days leading up to the 2020 election, the book reveals, US intelligence showed that the Chinese believed that Trump planned to launch a military strike to create an international crisis that he could claim to solve as a last-ditch effort to beat Biden.

Milley, who had become increasingly concerned about China’s growing military power and the potential for one misread move to set off combat between the world superpowers, first called Li around that time on a secret backchannel. He wanted to assure Li and President Xi Jinping that the United States was not planning to attack China.

But even after the call, Milley concluded that the situation was “grave” and Li “remained unusually rattled”, the book reports. Trump, Milley had concluded, did not want a war but might order the launch of some sort of military strike that would set off a chain reaction and lead to war. “I continually reminded him,” Milley is quoted as saying, “depending on where and what you strike, you could find yourself at war.”

Later that day Milley spoke to Nancy Pelosi, speaker of the House of Representatives, who was growing increasingly concerned Trump would lash out and use military force. “This is bad, but who knows what he might do?” Pelosi said. “He’s crazy. You know he’s crazy. He’s been crazy for a long time. So don’t say you don’t know what his state of mind is.” “Madam Speaker,” Milley said, “I agree with you on everything.”

Milley, who as the president’s top military adviser is not in the chain of command, tried to reassure Pelosi that he could stop Trump. “The one thing I can guarantee is that as the chairman of the joint chiefs of staff, I want you to know that … I want you to know this in your heart of hearts, I can guarantee you 110 per cent that the military, use of military power, whether it’s nuclear or a strike in a foreign country of any kind, we’re not going to do anything illegal or crazy,” he said.

“Well,” Pelosi said, “what do you mean, illegal or crazy?”

After speaking to Pelosi, Milley convened a meeting in a war room at the Pentagon with the military’s top commanders, telling them that he wanted to go over the long-standing procedures for launching a nuclear weapon. The general reminded the commanders that only the president could order such a strike and that Milley needed to be directly involved.

The general added: “The strict procedures are explicitly designed to avoid inadvertent mistakes or accident or nefarious, unintentional, illegal, immoral, unethical launching of the world’s most dangerous weapons.”

Then he went around the room and asked each officer to confirm that they understood what he was saying. Twelve days later, Milley said, he thought he might be one of the happiest people at Biden’s inauguration because Trump had finally left office. “We know what you went through,” Biden told Milley shortly before the inauguration. “We know what you did.”

While much had been reported about Milley’s views of Trump, the book’s depiction of Pence reveal for the first time the depths that the vice president went to as his fealty to Trump collided with calculations about his political future and the counsel of his aides and advisers to follow the US constitution.

In the days leading up to January 6th, Pence called Quayle, the only living Republican vice president forced to certify an election in which he was on the losing ticket. Pence told Quayle that Trump was convinced that Pence could throw out the election results to keep himself in power.

“Mike, you have no flexibility on this,” Quayle told Pence. “None. Zero. Forget it. Put it away.”

“I know, that’s what I’ve been trying to tell Trump,” Pence said. “But he really thinks he can. And there are other guys in there saying I’ve got this power.”

Pence then echoed Trump’s false claims of election fraud. “Well, there’s some stuff out in Arizona,” Pence said. “Mike, I live in Arizona,” Quayle said. “There’s nothing out here.” – This article originally appeared in The New York Times