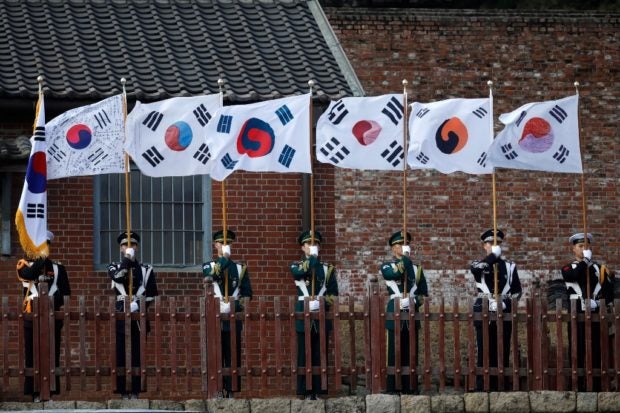 South Korea’s test is a strategic advance for Seoul. It has been strengthening its military capabilities to counter the threat posed by the North, which is under international sanctions for its nuclear weapons and ballistic missile programs.

“It’s extraordinary timing that you have not one but two Koreas testing ballistic missiles on the same day,” Yonsei University professor John Delury told AFP.

“It does speak to the fact that there’s an arms race in this region that everyone needs to pay attention to.”

The South’s missile was fired underwater from its newly commissioned submarine Ahn Chang-ho, and flew the planned distance before hitting its target, the presidential Blue House said.

With the successful tests, South Korea now has “sufficient deterrence to respond to North Korea’s provocations at any time,” Moon said, adding that his country should continue increasing its weapons programs to “overwhelm North Korea’s asymmetric power.”

Within hours he was rebuked by North Korean leader Kim Jong Un’s influential sister Kim Yo Jong, who lambasted him for making a “thoughtless utterance” and incorrectly accusing the North of “provocation.”

Seoul has an “illogical and stupid habit of describing its act as a just one supporting peace and describing our act of similar nature as the one threatening peace,” she said in a statement carried by Pyongyang’s official Korean Central News Agency (KCNA).

Earlier in the day, the North fired “two short-range ballistic missiles” from South Pyongan province into the sea off its east coast, Seoul’s Joint Chiefs of Staff said.

On Thursday, KCNA reported the missile launches had been a firing drill for a “railway-borne missile regiment,” with the aim of increasing “the capability of dealing an intensive multi-concurrent blow at the forces posing threats to us.”

It was Pyongyang’s second firing in less than a week after KCNA reported it had test-fired a new long-range cruise missile over the weekend.

The US State Department condemned North Korea’s Wednesday launch, saying it was “in violation of multiple UN Security Council resolutions and poses a threat to the DPRK’s neighbors” and others.

But it reiterated its willingness to use diplomacy with the nuclear-armed North, known officially as the Democratic People’s Republic of Korea, and urged them to “engage in dialogue.”

The United Nations also expressed alarm over the tests and called for dialogue, saying it was “concerned by the latest developments that we’ve seen,” according to UN spokesman Stephane Dujarric.

Later Wednesday, a same-day meeting of the UN Security Council was called.

Analysts said the timing of Pyongyang’s launch, which took place shortly after China’s foreign minister held talks in Seoul, was an unmistakable signal to Beijing. China is North’s key ally and main partner for trade and aid.

Yang Moo-jin, a professor at the University of North Korean Studies in Seoul, said Wednesday’s launch “looks like North Korea’s indirect message and even request to Beijing for the Korean peninsula to be addressed as a central agenda issue for China.”

The United States are treaty allies, with 28,500 American troops stationed in the South to defend it against its neighbor, which invaded in 1950.

The impoverished North says it needs its nuclear arsenal to deter a US invasion, and its weapons programs have made rapid progress under Kim.

But it finds itself more isolated than ever after it closed its borders early last year due to the coronavirus pandemic.

Talks with Washington have been stalled since the collapse of a 2019 summit between Kim and then-president Donald Trump over sanctions relief and what Pyongyang would be willing to give up in return.