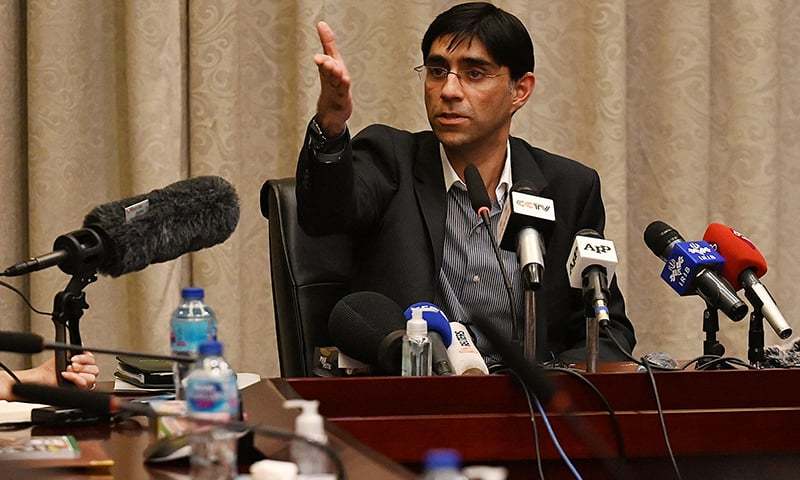 National Security Adviser Moeed Yusuf on Wednesday urged the world to engage with the Taliban-led Afghanistan and said the United States should listen to Pakistan’s message as it reassess its relationship with the country.

Speaking to reporters in Islamabad, Yusuf said Pakistan had continuously advocated for a political settlement to the conflict in Afghanistan and maintained that a military solution was not possible.

He added that Washington, which signalled this week it was reviewing its relationship with Pakistan, should take note and listen to Islamabad’s advice on now ramping up engagement with the new Taliban government.

On Monday, US Secretary of State Antony Blinken said the US will be looking at its relationship with Pakistan in the coming weeks to formulate what role Washington would want it to play in the future of Afghanistan.

Yusuf warned against isolating Afghanistan as Western powers — while pledging immediate humanitarian aid — are largely holding off on any further financial assistance or formal recognition of the Taliban government, while the US has frozen roughly $10 billion of Afghanistan central bank assets.

Many countries have said they are waiting to see whether the Taliban uphold human rights and stem militancy.

“It may be popular to talk about ‘wait and see’, but wait and see essentially means a collapse,” the NSA said.

“Humanitarian assistance is … a stop-gap arrangement to ensure there is no immediate humanitarian crisis, that does not equate to governance, institutional and economic support which is needed by any country to survive in the conditions that you find [in] Afghanistan.”

Yusuf reiterated that Pakistan could not host any more Afghan refugees for several reasons, including financial constraints.

“Pakistan is in no condition right now to accept any more refugees,” he said, noting that Pakistan was already hosting more than three million Afghan refugees who had fled the war and violence in their country over the past decades.

Yusuf said Pakistan would try to do whatever is possible to help Afghans, but that international efforts should step up to prevent a humanitarian crisis. He asked the world community not to repeat the past mistake of abandoning Afghanistan.

He also warned that the militant Islamic State group and other militants including the banned Tehreek-i-Taliban Pakistan (TTP) whose members have sought refuge across the border could exploit such a situation.

“You don’t need to think too much to know what will happen. There will be a security vacuum. You already know ISIS is present there, Pakistani Taliban are present there, Al Qaeda is there,” he said, adding that these groups were sworn enemies both of Pakistan and the West.

“If Afghanistan destabilises, the spillover effect comes to Pakistan,” he emphasised.