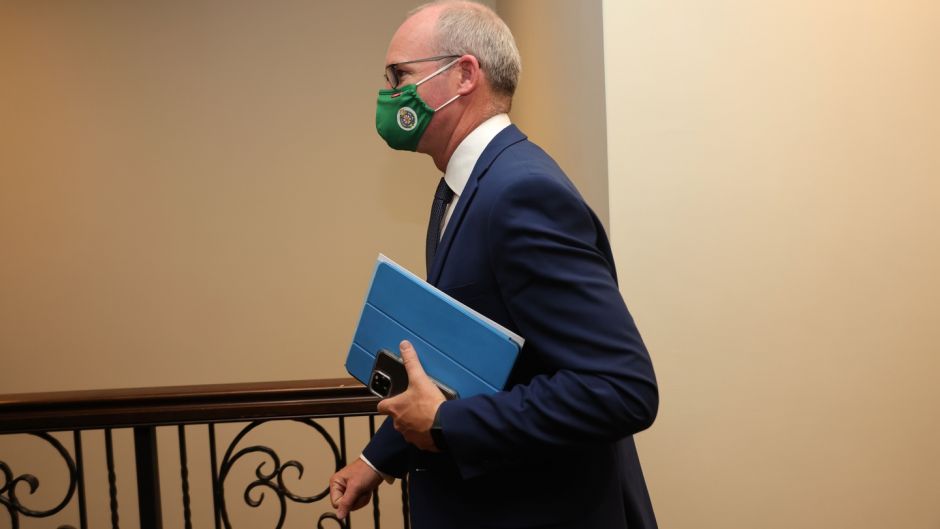 To say Fianna Fáil TDs are unhappy at having to march through the lobbies in support of Simon Coveney would be an understatement. But they know that voting no confidence in a minister of the government is the same as voting no confidence in the government. There is much speculation about who might or might go over the side. Barry Cowen is due to speak, so his contribution will be watched closely. Kilkenny TD John McGuinness was recently reported to be in France but he is likely to have an Opposition pair for the vote, while Sligo TD Marc MacSharry who called for a parliamentary party meeting to discuss if they should support the Government in the vote resigned from the party on Wednesday evening.

Voting against the Government, or not turning up for the vote, incurs an automatic six-month suspension from the parliamentary party.

MacSharry’s resignation means Fianna Fáil parliamentary party meetings will be deprived of some of the contributions of a leading opponent of Micheál Martin’s leadership – but despite that, TDs departing is not something any leader wants to see.

The eulogies to Coveney from the Fine Gael benches will be something to behold. The party produced a video yesterday that was distributed on social media and which lauded the foreign affairs minister as something akin to a cross between John F Kennedy and the Dalai Lama. It has been widely shared in political circles, though not perhaps in the way that was intended. You will hear much of how Coveney has been instrumental in the Irish Government’s response to Brexit (true) and how his tireless efforts are crucial to maintaining peace in Northern Ireland (hmmm) and how Ireland’s voice on the UN Security Council would be irreparably damaged if Coveney were to resign or be fired (not true). Last week, the Taoiseach practically suggested that it would be another fierce blow to Afghanistan if Coveney were to depart from the security council role. As if the Taliban weren’t bad enough. Coveney himself – wisely – has adopted a pose of conspicuous humility and self-flagellation. Expect more of that this evening.

Coveney’s account of events is that he did not invent the job for Katherine Zappone, but rather dreamed up the job and then decided that she would be right for it. He did know, however, that she was looking for a job. He also insists that he did not offer her the job, though she thought he did. And when Zappone communicated to him and his officials that she believed she had been offered the job, he or they did not correct her. The credibility of that story is likely to be interrogated by Opposition deputies quite aggressively. It will be interesting to see which of his colleagues explicitly say they believe it.

If the skirmishing of recent days is anything to go by, there is likely to be a high degree of rancour in tonight’s debate. Coveney is everything that a certain type of Sinn Féiner loves to hate; similarly, the Fine Gaelers bristle at the mere suggestion of moral superiority among the Shinners. If it follows the example of the motion of no-confidence in Leo Varadkar last year, the debate could become quite personalised and bitter. Yachts may be mentioned. Ditto IRA murders. Parallel to all that will be the Sinn Féin-Fianna Fáil dynamic – which if anything is even more bitter than Fine Gael vs Sinn Féin.

5 The Evil Elites vs The Virtuous People

Sinn Féin will use the opportunity to reprise its constant, populist theme of the self-interested elites on one side (epitomised by Coveney) versus the ordinary people (such as themselves) on the other. This is a trope of populists the world over; Sinn Féin itself describes its brand of politics as “left populism”. It’s a perfectly legitimate tactic – though opponents are likely to point out the other side of populism, which is that its proponents tend to present easy solutions to difficult problems. Nonetheless, it’s hard to see how the Zappone affair doesn’t present Sinn Féin with a huge opportunity to reinforce its central critique of both Fianna Fáil and Fine Gael. In that respect, the Government parties have nobody to blame but themselves.