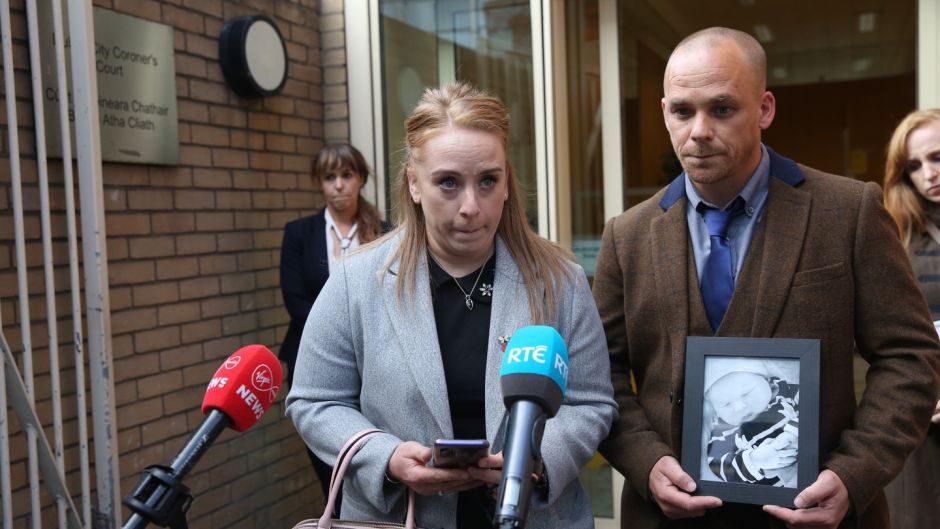 A senior consultant has admitted there were failures by St Luke’s General Hospital in Kilkenny in the care of a baby boy who died five days after an “acute event” at his birth as well as the treatment of his mother who was 11 days overdue.

Baby Laurence Somers died at the Coombe hospital in Dublin on January 28th, 2018 after being transferred from St Luke’s following complications suffered during his delivery by an emergency Caesarean section.

Dr Trevor Hayes, the clinical director for obstetric and gynaecological services at St Luke’s, told Dublin District Coroner’s Court that he accepted Laurence was a normal baby who was delivered in poor condition.

Dr Hayes offered a sincere apology on behalf of the hospital to the boy’s mother, Gráinne Somers, and her family, as he appeared before an inquest into the baby’s death.

Ms Somers, a mother of two other children who lives in Kilkenny, criticised the lack of information provided by medical staff at St Luke’s at the time – about how seriously ill their son was or that he had to be resuscitated at birth.

The consultant told the inquiry he would not enumerate the hospital’s failings as they “would be obvious”. However, he expressed hope that his presence in court would give the family some degree of closure.

Dr Hayes admitted an ultrasound should have been carried out on Ms Somers on the day before Laurence’s birth when she attended the hospital, as required in hospital policy for women 10 days overdue.

“The ultrasound should have been done, no doubt about it. The protocol is there for a reason – to be followed,” said Dr Hayes.

The consultant said it was difficult to say exactly why baby Laurence died but he noted there was evidence the boy had inhaled meconium (mucus and bile found in newborns) in his lungs.Dr Hayes said the outcome might have been different if an ultrasound had been carried out.

Questioned by counsel for the Somers family on whether the boy might have survived if Ms Somers had been induced on that date, Dr Hayes said he thought he would have “had a good shot that he didn’t have”.

The inquest had heard Ms Somers and her husband, Laurence, had certain types of antibodies which increased the risk of anaemia in their baby.

Dr Hayes acknowledged every patient should see a consultant at least once during their pregnancy, even though Ms Somers had admitted it had not happened in her case.

The inquest heard several changes had been made at St Luke’s following the baby’s death including a dedicated consultant in charge of the assessment unit. The coroner, Dr Crona Gallagher, returned a verdict of medical misadventure which she said was based on the “critical evidence” of an ultrasound scan that did not take place. If it had been performed, Dr Gallagher said its results might have led to her having an earlier delivery.

Speaking after the hearing, Ms Somers said the verdict had been a long time coming but they had finally got closure.

Ms Somers said they fought endlessly for answers about the death of her “beautiful, perfect little boy. We now know that hospital guidelines were not followed,” said Ms Somers.

She added: “We hope healthcare providers take on board the importance of listening to pregnant women.”